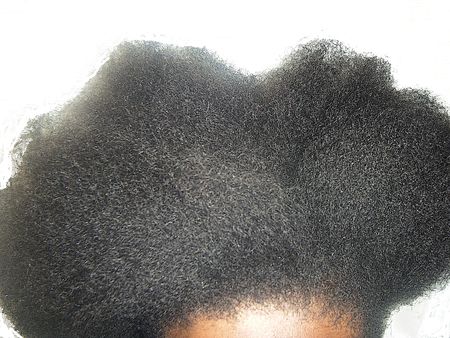 Here is a study of afro hair and its specificities:

The hair of all human beings have the same basic chemical composition:keratin proteins.
The keratin proteins are sealed from each other by sulfur molecules, which give them a better cohesion and rigidity, while the form of amino acids sulphured component of hair.
A good distribution of keratin can make the hair stronger.
Black populations hair differs in the distribution of lipids in the hair shaft. The sebaceous gland secretes sebum, which lubricates and protects the hair, it also produces keratin.
Among black people, the hair follicle is curved.
Each strand of hair grows in a tiny spring-shaped puller bouchon.ll grows almost parallel to the scalp and is whirling on itself, making it curly or kinky. In general, black people have less hair compared to the Caucasian population, but their texture is more dense. For this reason it is often referred to as “thick”; According to some studies, this density would protect the scalp from the sun.
Afro hair are less densely concentrated: the average density of hair is about 190 hairs per square centimeter. This rate was significantly lower than Caucasian hair, which, on average, produces about 227 hairs per square centimeter.
On the other hand, Afro hair are growing slower than the hair of Caucasian type: Afro hair grows at an average rate of approximately 256 micrometers per day, while that of Caucasians increases to approximately 396 micrometers per day, less than 0.9 cm per month as against 1.2 cm for Caucasian hair.
This type of hair is dry and its unique shape also makes it very likely to break when it is combed or brushed;
Its unique shape, is often limited length that hair can grow that combing and brushing tends to break the tip of the hair.

Afro hair is dry and brittle

– Among black people, the sebaceous gland is smaller and therefore produce less keratin and sebum which makes the hair dry.
Under a hot, humid, sebaceous glands, stimulated by the sun produce more sebum.
However, in temperate climates, as in some European countries, curly hair will tend to become dehydrated due to lack of sun.
On the other hand, the lack of moisture causes a “tightening of the pores of the skin which has three effects on the scalp hair afros:
1 – “The pores tightened confuse the sebum from its natural course, instead of vented to the outside of the scalp, it remains below the skin as toxins, which encase themselves around the roots and may hinder their irrigation
2-Outside the scalp, the scarcity of sebum (already low by nature) accentuates drought and curling hair, which leads to greater difficulty in styling.
3-The dehydration of the scalp can also cause a scaly condition, ranging from simple films to real skin diseases. ”
On the other  hand, pushing the curly hair, keratin is poorly distributed making it too brittle as dry”
– Scalp, too, tend to be dry because of lack of sebum resulting in dandruff.
– Hairdressing practices are also very drying to the hair dry naturally (straighteners, straightening irons, which dehydrates the hair …). “They will cause or exacerbate the fragility of our hair is naturally dry and brittle. This can cause significant falls thereafter.”
-l ‘hard water also makes hair more fragile, because it dries them up.

Our hair is dry, brittle and grow slower. What worries.
Remember that the texture allows us a multitude of hair: braids, weaving mats lying ….
Our hair requires a special care, and when properly maintained, it becomes beautiful.

MY ADVICE:
– Require our hair dry “shampoo suitable for very dry hair and frizzy. And not too much detergent because with hard water it will accentuate the dryness of the scalp and hair shedding. So make them more dry and brittle. ”
Given the difficulty in finding a shampoo suitable for curly hair, an American technique called “no poo” was invented. This technique is to remove the shampoo and replace it with a conditioner when washing.
“Do not confuse moisturize and lubricate the hair. the fats can suffocate the hair and scalp clogging the pores and which does not allow him to breathe.
Use moisturizer after shampooing, also exist that allow spray to moisturize the hair.
-If you live in a city where water is calcareous, and if you can, wash your hair with rain water or rinse hair with mineral water.
Otherwise use a conditioner that will fight against the drying effect of the action in limestone
-If you have dandruff: use a shampoo suited for dry scalp,
Indeed, “the film in the hair of Caucasians are the effects of a scalp too fat, not for curly hair type, there is an excessive but unmasked the bacterial flora is quite normal”
Promoting “the anti-dandruff shampoos little assayed in piroctone olamine and acid salicilique. And always use after-shampoo very nourishing and restructuring”